Many of you know I spend some time in the peace and quiet of the deep woods during parts of the summer. As I was walking the dog along a lone dirt road the hairs on the back of my neck and along my arms stood up. I peered through the dense trees on the left looking for any movement, then, I looked right. I always do this, though I’ve never actually seen any animals other than a cute chirping squirrel once and a lot of deer tracks. I perked my ears and listened for rustling. Nope, nothing. Just that eerie feeling. I know animals are out there. They have to be. It’s a forest for crying out loud. My dog chose that moment to stop and turn around (he usually walks for at least a mile). This time, he was done and who am I to argue? We turned back toward the safety of our little cabin and once inside, I read a book. Weeks later I heard a story that a man a few miles down, walking on the same road had a similar experience: standing hair, feelings of being watched. He turned around, and down the road, a wolf was following behind. 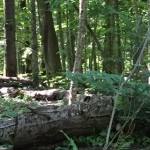 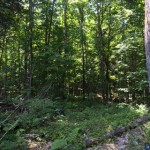 Last night while I walked my dog through the neighborhood, later than usual around ten at night, I felt a little creeped out. I live in the best of both worlds from the deepest woods to the big city of Chicago. That hair standing, someone watching feeling felt the same regardless. Maybe it was just the late hour on a hot summer night with the wavering tree shadows? Maybe it was because more people were out since the weather was so nice? Whatever it was, I paid closer attention to my surroundings. A cat sat licking it’s leg in the middle of an alley. A couple rushed passed on their bikes. Laughter wafted on the streams of a charcoal barbecue party. Nothing happened, it was very uneventful but maybe that’s because I was being dilligent. Call it the sixth sense or intuition, maybe it’s something scientific like electromagnetic waves. I believe in it.

Be sure to visit Dyanne Davis’ blog to see what she’s talking about this week!

For fun, inspiration, and feeding the dream!